Like in the previous period, the work during the tenth reporting period of the activities of the Integrity Pacts Initiative were marked by the COVID-19 crisis. However, this has not been the only challenge: in the context of a number of political scandals and the ensuing protests against the Government in the course of more than four months, public attention has been divided between the controversial measures those in power instituted to handle the health crisis and their efforts to survive in power. In this situation, broader systemic problems such as public procurement are no longer on the agenda of the general public and they stay under the radar which significantly hampers the process of achieving essential change.

Back to the tighter framework of the initiative, our team was once again faced with the situation of “comings and goings” in relation to the communication with the Contracting Authority while monitoring the construction of Zheleznitsa Tunnel. On the one hand, the Independent Observer was provided with full and adequate assistance during on-site visits and meetings with construction workers. On the other hand, in the context of remote work both of the TI-Bulgaria team and of the administration, the complete absence of flexibility of the Road Infrastructure Agency (RIA) to provide data stored in their premises has become apparent. The issue with access to information has also become evident in the communication with the Ministry of Regional Development (superior for RIA) – as of the end of December, our organisation has been pursuing a lawsuit against the MRDPW for the failure to provide in full information requested under the Access to Public Information Act.

Our team had to expand and update the content of the Monitoring Report which was begun as early as the beginning of 2020 for several times. In a dialogue with the RIA management team for the Zheleznitsa Tunnel Project, we decided to split the monitoring report in two parts, each covering individual aspects of monitoring. Despite the challenges, we have managed to complete the verification procedure and to publish the two Monitoring Reports in Bulgarian. We will publish the main findings and conclusions in English in the beginning of 2021.

During the reporting period, the Independent Observer carried out three on-site visits – in July, October, and November. In the same period, our team members took part in a total of six regular monthly progress meetings which are held with the Contracting Authority, the Contractor, and the Construction Supervisor for the respective section. Three of the meetings took place on the territory of the construction sites while the December meetings were held online due to the restrictions imposed by the authorities in relation to COVID-19. As is tradition, after every meeting we posted up-to-date information about the progress of construction work presented by the respective Contractor on the project website Monitoring section, as well as photos with brief comments on Tunnel.Report.

As of the end of December 2020, the main concern remains the observance of the deadlines set out in the contracts for the public procurement. This is the time to note that, in August, RIA concluded annexes with each Contractor providing for an extension of the deadlines by 60 days. While for the most complex lot, which has the longest completion deadline respectively, this resulted in the implementation “getting ahead” of the work schedule*, for the bridge facilities north of the tunnel (Lot 1) even this extension, according to our team, is quite insufficient for the work to be completed on time.

As we have noted in an overview a year after the start of construction, approximately 2/3 of the overall deadline for this section saw the completion of a little over 1/3 of the construction work, respectively in the remaining 1/3 of the deadline, the Contractor will have to complete 2/3 of the construction and assembly works envisaged. In addition to this delay, the intensifying landslide processes on the boundary between Lot 1 of the public procurement under our monitoring and the road section to the north (assigned in another procurement) pose additional obstacles and will delay construction for an indefinite time. Concern is caused mainly by the fact that, as of the end of the December 2020, there was still no project solution to handle the landslide or a specific plan to perform the construction and assembly works in Lot 1. The detailed observations will be covered in the next interim monitoring report which we plan to publish in the spring of 2021.

Within the ongoing activities to popularise the Integrity Pacts instrument and involve the public in the monitoring, we continued the campaign in social media. The video of the Transparency International Secretariat made an addition to our own series of posts with “thought provoking questions” about Zheleznitsa Tunnel and the appeals to share observations, concerns, and questions via Tunnel.Report.

In November, we organised training for the media in Blagoevgrad Region.** Keynote speakers were renowned Bulgarian investigative journalists while the event itself prompted the interest of local reporters not only personally (as trainees) but also as an interesting event to be covered in the media. This proved a good opportunity to popularise the project among the local communities despite the epidemic situation in the country. In the following weeks, the epidemic situation deteriorated, and the authorities imposed yet another round of restrictions which limited the possibilities for travel. Still, we believe that the coverage of the event has had an effect which will grow ever more palpable. Our ambition is to encourage not only the media but also “ordinary” citizens to benefit from the opportunities and tools accorded by modern technology and the regulatory framework for pro-active search of information, critical thinking, and exercise of public pressure to ensure greater transparency in the use of national and EU funds.

A tool of this sort is the special platform created for the project Tunnel.Report. Via the platform we received a number of questions in relation to safety and environmental protection in the course of the construction work. The responses obtained from RIA are published on the portal so anyone can read them.

In the summer of 2020, the Public Procurement Agency held a public survey about the latest amendments to the Public Procurement Act. Transparency International Association joined the discussion with several recommendations one of which – concerning the provisions defining substantial amendments to the procurement contracts – was accepted and is already in force. The issue which the solution targets was identified in the course of the monitoring of Zheleznitsa Tunnel.

*As per information from the Contractor as of October 2020.

**The district area of construction of Zheleznitsa Tunnel. 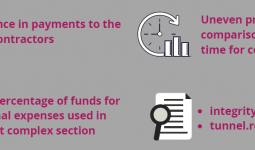 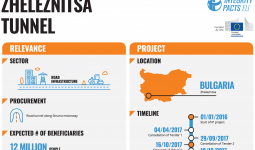